The Bubba Organics Difference
Our honest to goodness premium skincare is proudly Aussie made with 100% nature-sourced ingredients, and no added water for happy, healthy skin …naturally!
Experience our difference with 15% off your first order
Privacy

Essential Baby: The unlikely remedy that ended one mum's battle against cradle cap. 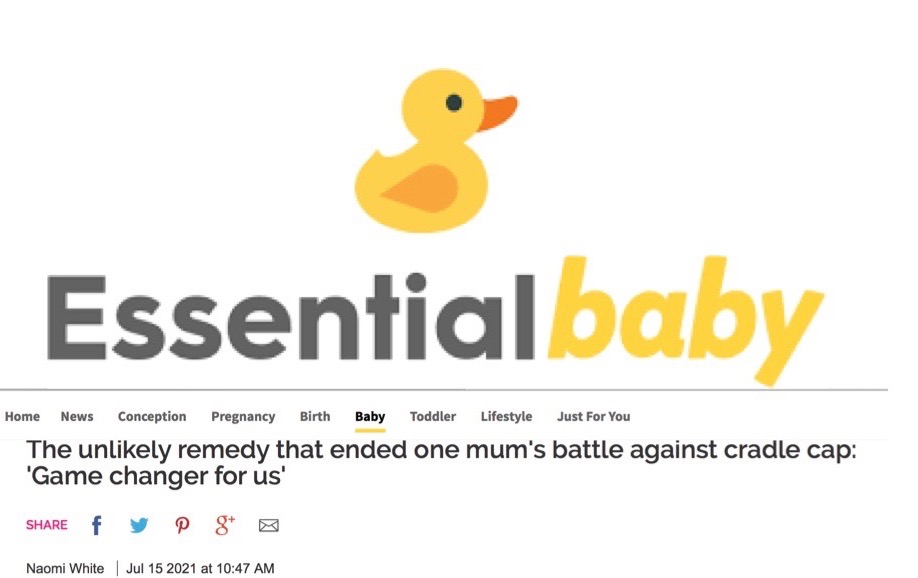 Tahlia Strattan knows all too well the frustrations of dealing with cradle cap. The first time mum had tried almost every solution suggested to her from midwives, maternal health nurses and mothers' groups to get rid of the white and yellow flaky scales on her son Lucas's scalp.

The condition can affect up to 10 per cent of babies, usually between one to three months and mostly clears by the age of one. While it can be left untreated, many parents opt to use home remedies to treat it due to its appearance, especially in severe cases.

It poses no harm to babies, however parents are advices to consult with their GP if it is severe or begins to appear on other parts of the body, including the face. It's not contagious and is not caused by poor hygiene, but rather their skin glands producing too much oil. For Tahlia, many of the go-to treatments - olive or coconut oil - had failed to loosen these, and instead created a secondary problem as Lucas began to develop dry skin as she tried to wash the oil out of his hair. "He started developing it pretty much straight after birth, quite early on when he was only weeks old. I tried everything. The coconut oil worked a little bit, but it didn't do a lot and I had to do it constantly, and it left his hair very oily. So I was washing it all the time, but then he got dry skin from the constant washing," she said. She finally found a solution in an unlikely product: baby massage oil, and said she hasn't looked back. Picture: A before and after shot of baby Lucas, showing how his cradle cap has cleared
"I was amazed how quickly it worked and how well it worked. I was only using it every second night to start with during our usual bath routine, to make sure he had no reactions or anything, then I started using every day." "As we were having a play in the bath i'd let it soak in and used a soft bristled hairbrush to just rub it into the cradle cap to get it to penetrate a bit. Then i'd give it a light wash with the shampoo and within maybe four-five days it pretty much was non-existent anymore, it had all gone. It was pretty incredible." Now five months, Lucas is cradle cap free, but Tahlia continues to use it to maintain his soft scalp, even using it on his dribble rash. "Even now if we've gone a few days not using it, the cradle cap starts to creep up again, so every time he has a bath put it on. It's been a huge game changer for us." Better yet, the massage oil she used - a Kadadu Plum and marshmallow belly and bub massage oil made by Bubba Organics, is made by two Melbourne based mums who say the results for cradle cap are a welcomed fluke. "Being a new mother is the most beautiful experience, but it can also be stressful, particularly when dealing with ongoing skin issues like eczema and cradle cap," company co-founder Kerri Chadwick said.
← Previous Next →